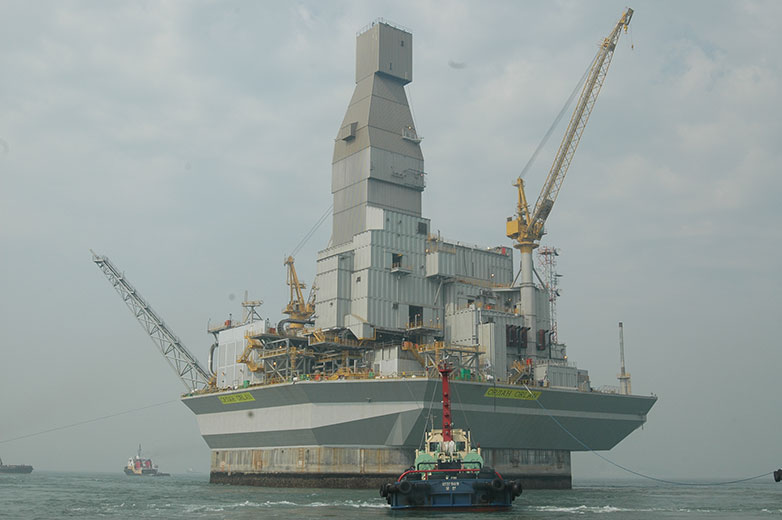 Orlan is the first production platform installed a the Chayvo field on the Sakhalin shelf, approximately 11 kilometers off the east coast of Sakhalin Island.

The Orlan platform is a gravity base structure (GBS) set in around 14 metres of water. The platform consists of three basic components: a steel Mudbase, a concrete mid-section called Brick and steel deck Barge section which supports the drilling rig, platform facilities and accommodation quarters.

The Mudbase consists of a series of large tanks that can be flooded with seawater, thereby providing ballast control during the towing or refloating of the platform. Once on the seabed, the tanks are completely filled to obtain the maximum gravity load. The concrete Brick, situated on the Mudbase, is the main structural element, which can withstand gigantic ice ridges. The Brick supports the top deck Barge. The connection between the units is by gravity and there are no rigid connections.

Installation of the Orlan platform was completed in July 2005 and drilling operations commenced in December 2005.

Ausenco was involved in major retrofitting of the deck barge and also entire seismic analysis of the Orlan structure. Following are some of the tasks carried out during the period from 2001 to 2004:

ExxonMobil Development Company (EMDC) was considering options for achieving additional well penetrations into the south-western part of the Chayvo reservoir, particularly through the use of multilateral (ML) drilling. EMDC asked Ausenco to investigate the feasibility and number of additional well slots that could be provided on the Orlan platform.

EMDC engaged Ausenco to perform a well slot expansion study for the Orlan Platform. The study commenced in 2009 and the final report was submitted in April 2010. The study concluded that six additional slots could be added.

The main purpose of this study was to check the feasibility of moving the new slots towards the center of the Moonpool to increase the clearance from the Mudbase and Deck Barge Moonpool wall, to the extent that the diving survey inside the moonpool was no longer considered necessary.

Ausenco performed FEED, Detailed Engineering and construction support for the installation of additional well slots in the structure of the Orlan platform. The added well slots will enable drilling of additional wells from the platform. Ausenco’s involvement with this complex project commenced with conceptual studies in 2009 to 2011, and a front end engineering and design (FEED) contract in 2011 to 2012.

Mock-up Test – Design of mock-up silo and temporary structures. Engineering and supervision to choose the construction methodology for coring additional slots through post-tensioned concrete slab inside the Orlan platform.

Substructure Engineering – Some of the tasks which were carried out as part of the detailed engineering are: